be healthy > mind > widower alan talks about illness and grief The death of his wife, Emma, after a long and gruelling battle with cancer left Alan facing some of the darkest times of his life. Here, he discusses what he’s learned about mental health.

I met my wife, Emma, 13 or 14 years ago. About six months later, she slipped and broke her leg, and that was due to what turned out to be a tumour – a benign tumour. So, for the next 10 and a half years we went through a battle with cancer that eventually led, unfortunately, to a terminal diagnosis and her death on May 19th 2013.

We’d been very private in terms of our managing of the illness, so not only did I lose my partner and my soul mate, I suddenly found myself dealing with a lot of the trauma of what we had been through.

Obviously, as part of that, I started to have a lot of flashbacks, a lot of really bad dreams, playing back scenarios of the time when Lou died and not being able to sleep. I haven’t really slept properly for nearly three years now.

It kind of crept up on me. In the first few months it would be very easy to confuse it with grief and the sadness of losing her. But, as I went on, it was concurrent with lots of other things and it became like being at the bottom of a pit and not being able to see the light at the top of it. It just enveloped every aspect of my life and my friendships, the way I couldn’t deal… or find any happiness in any aspect of my life.

And yet, [I was] still going through the same pretences of work and going through the processes that I did before, in the hope that things would just work themselves out, and obviously they can’t without being able to deal with that head on, and I wasn’t.

One psychiatrist described it as pathological grief, and under that there’s the anxiety and stress attacks that I have.

There’s the PTSD, severe depression and a number of other little things that go with that; the insomnia is part of that, lots of symptoms and physical manifestations of losing diet, losing energy and not being able to concentrate. There’s lots of little things as part of that, but that’s pretty much the umbrella diagnosis.

The answer is simple: there is no stigma attached to it; it’s much more common than people ever think. It’s much more prevalent and I’ve learned that through being more open about it. There are a lot of people I’ve come across now through being more open, and it surprised me what those numbers are. They say one in four; it could be higher than that.

I think for men there’s a perception that it’s much harder because of the old thing about being masculine and being stronger.

But that again is just a myth. Reach out and speak to a friend. You’d be surprised at the warmth and empathy and understanding that I’ve received from my male friends and friends around me since I started coming out and talking about it. You know, we actually joke about my illness, and that’s a good thing.

How to cope with grief

If you have lost someone, here are some ideas for beginning to cope with the grieving process... 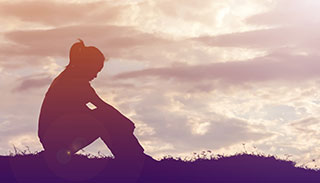 How to cope with grief

If you have lost someone, here are some ideas for beginning to cope with the grieving process...