Being active is important for our both physical and mental wellbeing. Here are just some of the ways that exercise is good for our health.

According to figures published by NHS Choices, exercise can reduce the risk of major physical illnesses – such as heart disease, stroke, diabetes and cancer – by up to 50 percent and lower the risk of early death by up to 30 percent. Physical activity can also boost self-esteem, mood, quality of sleep and energy levels, while also reducing the risk of stress, depression, dementia and Alzheimer’s disease. In fact, NHS Choices goes so far as to quote Dr Nick Cavill, a health promotion consultant, saying: “If exercise were a pill, it would be one of the most cost-effective drugs ever invented.”

Meanwhile, a large American research study (published in the BMJ in October 2013) found that, for people with heart disease, being active was just as good as medication. Exercise was equally effective at preventing type 2 diabetes in at-risk groups.

It can also help maintain a healthy weight: as calories go in as food, to be burnt off as “fuel” during exercise. This seems particularly newsworthy in light of the chief medical officer's annual report (published March 2014). In it, Professor Dame Sally Davies states that today close to two-thirds of adults and one-third of children aged two to 15 are either overweight or obese. This represents a dramatic shift in the health of the UK's population within the span of a generation. In 1980, she says, fewer than one in ten adults were obese (7%) compared with one in four today (25%). As doctors and medical experts keep telling us, being overweight is associated with the risk of a number of serious health conditions.

Finally, in terms of boosting mental well-being, don't forget that physical activity releases feel-good endorphins in the brain. The Mental Health Foundation has some practical suggestions to get you started and lists the benefits of regular exercise as boosting self-esteem, helping concentration levels and quality of sleep, and making you look and feel better. Coupled with lessening tension, stress and mental fatigue, it's a win-win situation, so what are you waiting for?

Feeling inspired? Read other articles on the topic of physical activity in our Health & Wellbeing section.

Can cervical cancer be avoided?

Cancer Research has found that 99...

What is incontinence? Causes, treatments and implications

What is incontinence?Incontinence occurs when you’re unable to control your bladder or bowel leading to accidental leakage, known as urinary incontinence and bowel incontinence respectively... 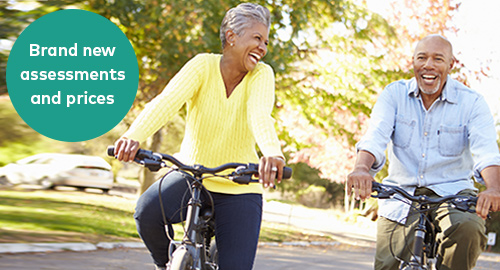 Can cervical cancer be avoided?

Cancer Research has found that 99...

What is incontinence? Causes, treatments and implications

What is incontinence?Incontinence occurs when you’re unable to control your bladder or bowel leading to accidental leakage, known as urinary incontinence and bowel incontinence respectively...