If the mere thought of take-off leaves you in a cold sweat, you’re not alone. Travel editor Jo Ascherl explains how she’s conquered her own fear of flying.

There was a time when I thought nothing of hopping on a long haul flight – to Beijing in my gap year, or jetting off to Rio for the carnival. Short-haul flights, meanwhile, were just a necessary part of the process of getting from A to B. Then, in the summer of 2005, my flight from London to Barcelona turned back mid-air due to “technical issues” and everything changed.

Since then, I’ve experienced terrible paranoia and extreme anxiety from the start of a flight to its end. It was on one such flight recently – while outwardly the epitome of calm to my six-year-old son – that I read about the easyJet Fearless Flyer courses. I signed up, before even thinking about what might be involved.

A month later and I’m in a hotel conference room in deepest Luton, in the company of 100 people with varying degrees of flying phobia. We’re here for the first part of the Fearless Flyer course: a three-hour talk headed up by charismatic Lawrence Leyton, a leading motivational speaker and expert in phobias, who you might have seen a few years ago on Channel 4 fronting a documentary on the subject.

Lawrence immediately puts his audience at ease with a series of fun psychological tests (“if people are having fun they learn…”), flagged up on a central screen. “It’s all about perception, and the pictures in your head,” he informs us, explaining that our fears are created by the images created by our vivid imaginations and that he is here to re-program us – “the brave die but the cautious never live” is his mantra. Next up, Lawrence introduces Richard Jones, a senior pilot from the “pool of wonderful easyJet captains”. He gives a much more technical talk about the anxiety-inducing sounds you hear while airborne, such as the air conditioning, and the “clunk” of the landing gear. This is followed by a split-screen visual on how often engineers check planes, and a few of our misconceptions are challenged – about what is happening to a plane during turbulence, for example. The fact that “planes don’t just fall out of the sky”, even if all the engines fail, is a revelation to me.

But what happens if…?

After a quick reference to the chilling Germanwings disaster in March 2015 (difficult to ignore), the floor is opened up for questions to Richard. Nothing is off limits and the group can confront their fears head-on – from “can a flock of birds get caught up in the propeller and stall it” (no, aircraft are tested with dead chickens) to “can a wing fall off?” (absolutely not). I refrain from asking a scare-mongering question about terrorists hacking the computers, particularly as I now know there are seven different backup systems. Lawrence steps up briefly to inform us that we are more likely to die being kicked by a donkey than in an aircraft – and we break for 20 minutes, on a statistical high.

The second half of the session is where Lawrence’s messages are put into practice – his three methods to banish our fears. My personal favourite is the ripping up of the “bad movie” of mental perceptions and replacing them with a “good movie”, but most people are fans of the tapping method – tapping various pressure points on the body. “I don’t know why it works, it just does,” says the person next to me. Lawrence is a very convincing speaker and his total reassurance is, well, totally reassuring.

A brief ask around the others leaves me with the sense that a lot of them fly high on double vodka and Valium. Their phobias range from claustrophobia, to fear of heights or crashing – or just a fear of flying itself. One lady is doing Fearless Flyers a second time as a refresher, and was so inspired the first time she did it that she got on a flight to Australia the next week. Another man is on his fourth go. “The amazing Barry,” notes Lawrence. “He comes along to help other people as he was so pleased it worked for him.”

The next day we are put to the test: the second part of the course is a 40-minute flight on an easyJet plane, from Luton airport, over Clacton-on-Sea, and full circle. As we all meet again in the check-in queue and are greeted by a beaming Lawrence and Richard, I no longer have that pre-flight anxiety in the pit of my stomach and feel genuine relief.

A few people break down as we board the actual aircraft, but the Fearless Flyer team members – all on the plane with us – are hugely supportive. Richard talks us through each stage of the flight with great precision… and we unanimously vote to take him with us on every flight hereafter.

After cheers in the air, and certificates all round on landing, we are guided safely back into the airport, and I decide that it has been an absolute triumph. Even if I did fly just from Luton to Essex and back!

One in six people is believed to be a nervous flyer. Read Lawrence Leyton’s tips on conquering these fears.

The easyJet Fearless Flyers course boasts a 95 percent success rate and is available at eight UK airports. For details (or to register for the free online webinar), visit the website or book your place on 0844 581 4956. 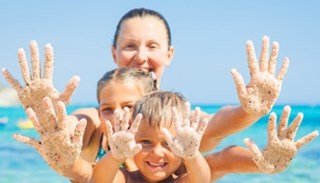